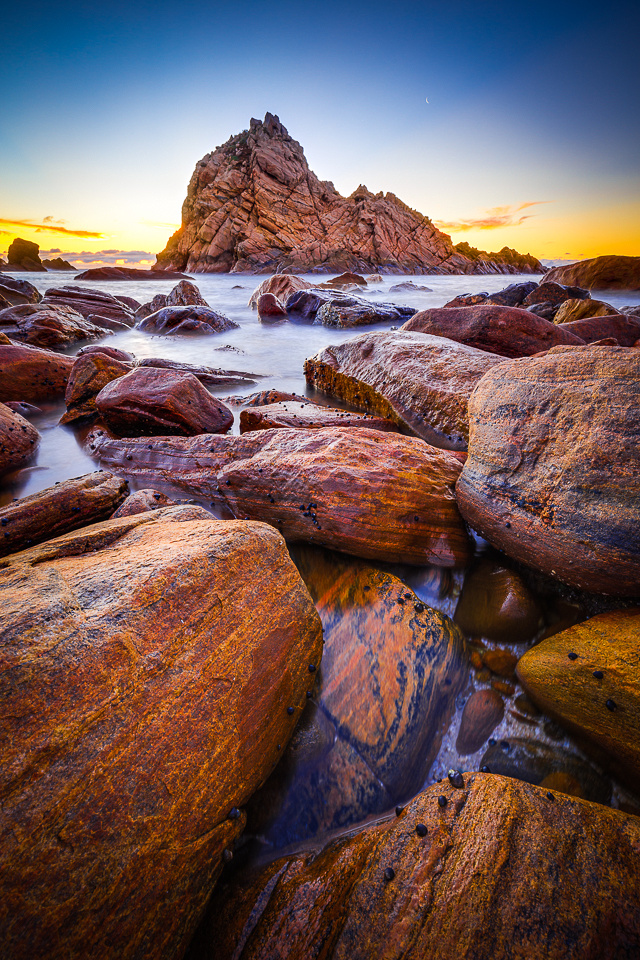 Okay, now before you get too confused about the title of this blog post, here's the story:


Last Saturday I had some time to spare and headed to Busselton to catch up with my good friend Gary. I made us of this trip and brought my camera gear along because there are two locations that I always wanted to check out and shoot, but never had the opportunity. And since both these locations were in the vicinity of Busselton, the decision was a pretty darn easy one :) 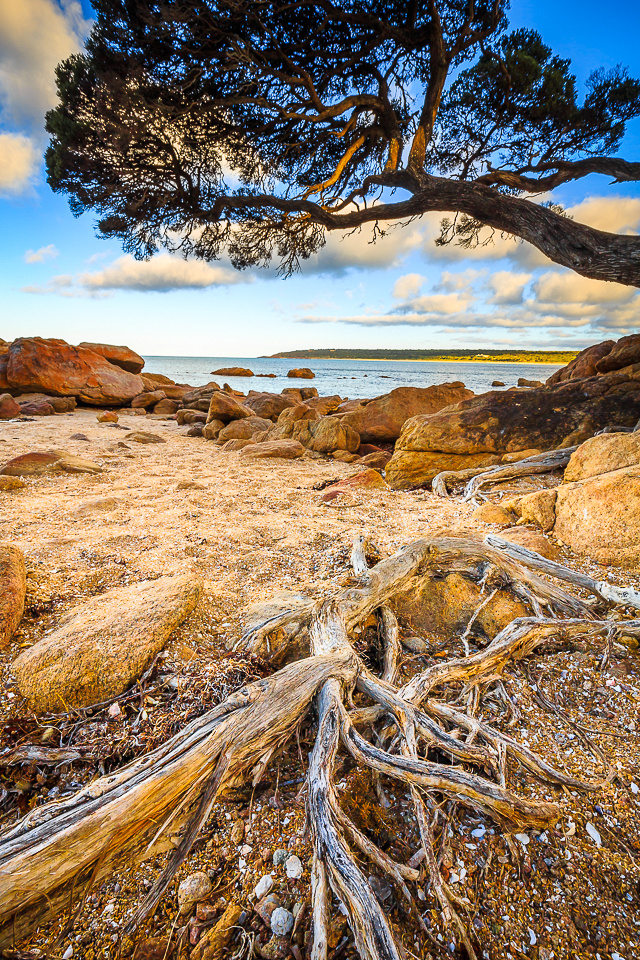 The first location was Bunker Bay. I had seen a photograph of this place a few months ago in a local gallery and had then and there made a little note on my photographic bucket list that I had to come here and check it out. And so I did! 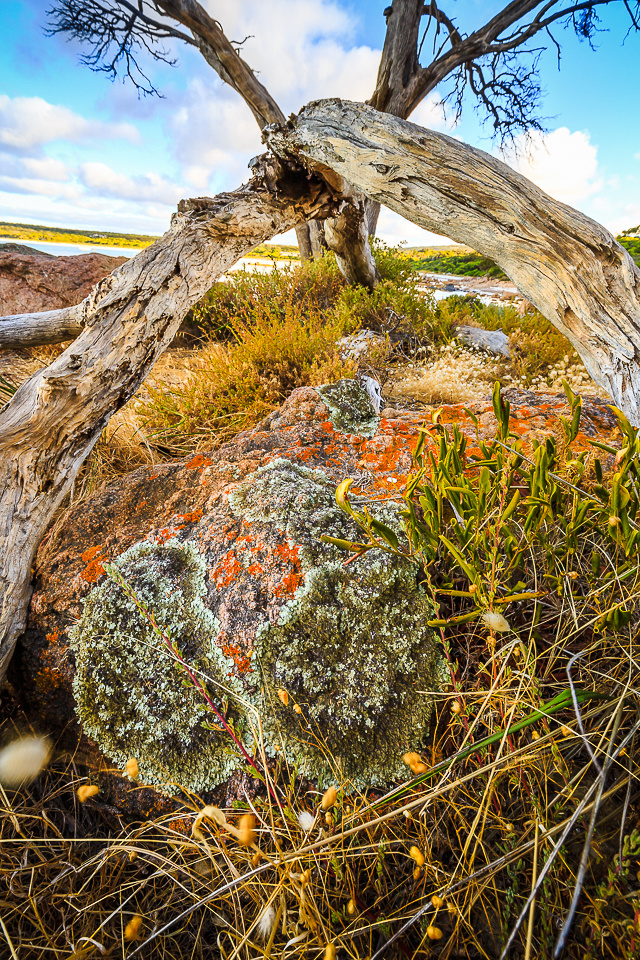 Bunker Bay is quite an interesting location with loads of boulders on the beach which are covered in orange moss.
But unfortunately it wasn't the location I was looking for for that evening since it was facing north east and was thus more suitable for a sunrise shoot(one that I usually never make, since my bed possesses massive gravitational forces in the morning, I tell ya!).
As the sun set in the West, the whole beach was already dipped in the shadows of the surrounding hills and I quickly took a few shots and then decided to move on... 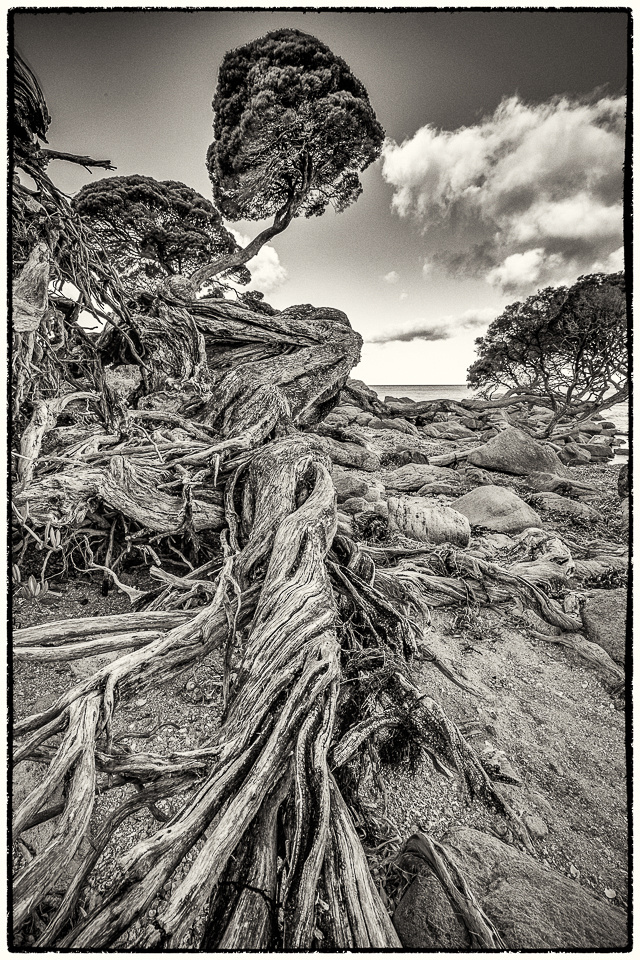 Sugarloaf Rock has been on my 'to-do'-list for quite some time but I always delayed it as it's quite a drive from Margaret River and, knowing my luck,  it would most certainly be raining whenever I got there... :) Nonetheless, a few months back Damien Seidel from NSW contacted me and refreshed my memory of this location as he was planning to shoot here as well. He had done so in January and I was still due to check the box off of this location, so I was quite happy to finally make the drive out here. :) 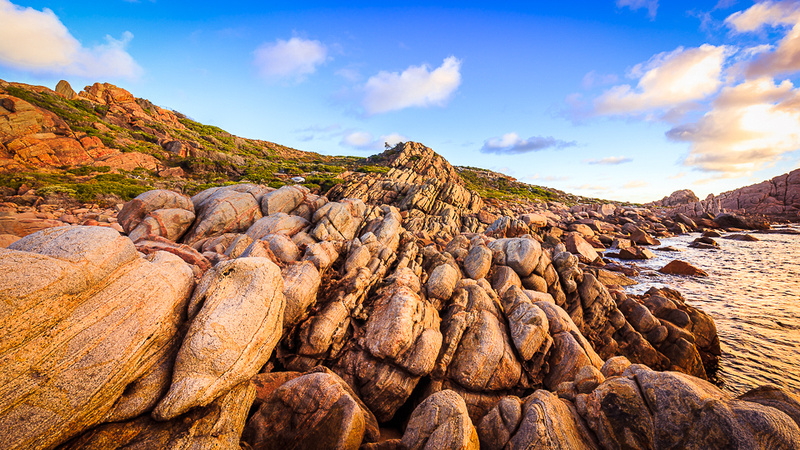 I had actually visited Sugarloaf Rock on the same day that Damien was shooting here in January, but back then I was doing the first stage of the Cape-to-Cape track, which we started at Cape Naturaliste Lighthouse in the north and we still had about 20kms to walk, so I couldn't stick around for Damien or the sunset.(I know I'm a terrible host!)

Anyway, as you can see this is really a fantastic location, for photogs and visitors alike! This massive rock is a great sight and there's loads of climbing to be done on the surrounding boulders, too! 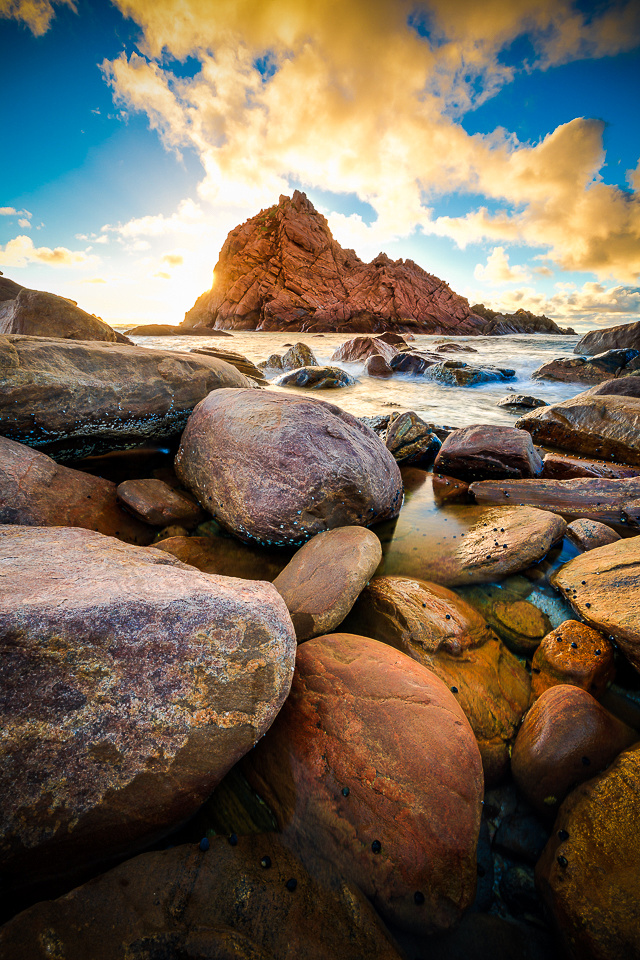 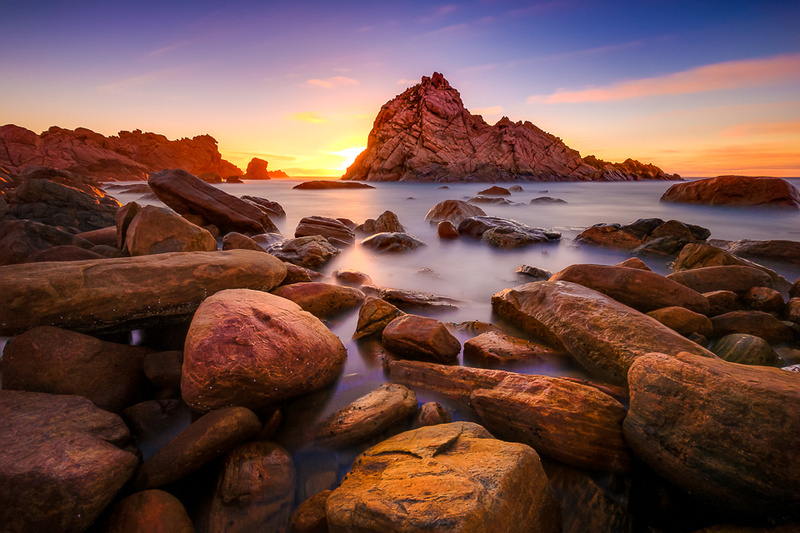 The above shot is a blend of 5 different exposures I took, using my B+W 10-Stop ND filter and a black piece of card to darken the sky (kinda like a budget Lee filter system, ha!). I then blended these images in Lightroom, using LREnfuse and gave it a little dodge and burn and voila!

The image below is a single frame and it's one of the frames I used to blend the above images.No 'photoshop' on this one. The silky water is the result of the 10-stop ND filter. 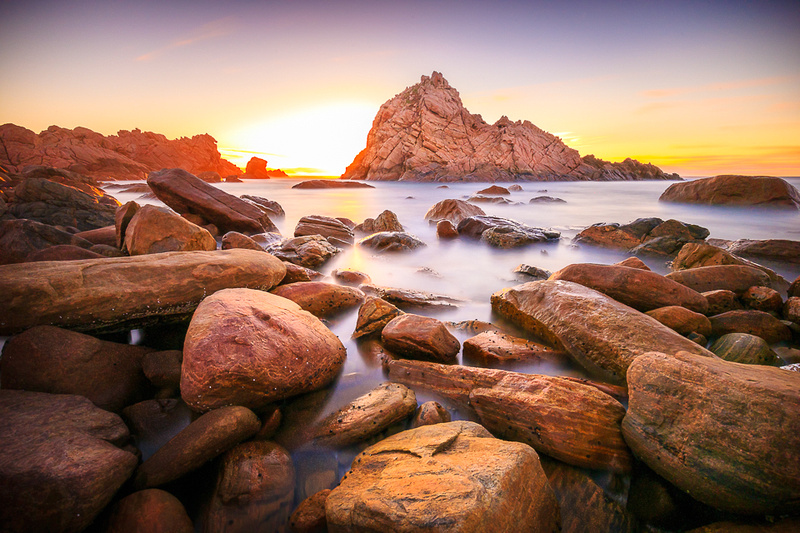 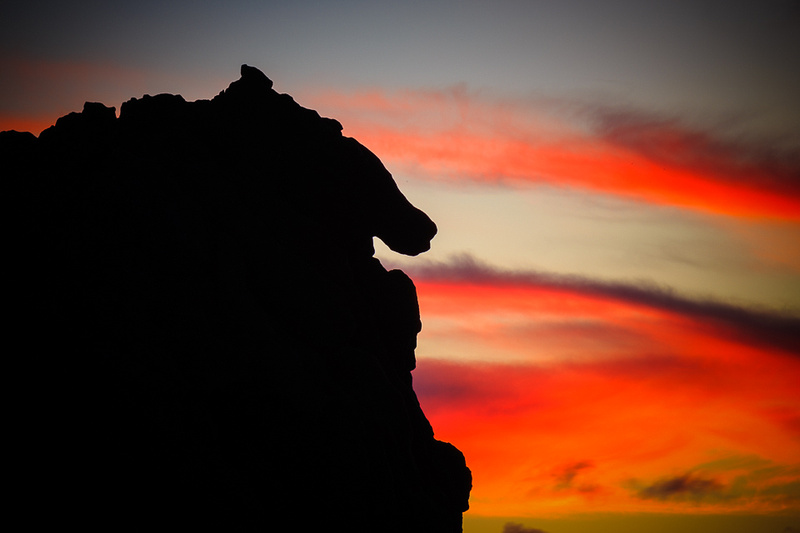 During my last visit to Sugarloaf Rock, my mate Leo, with whom I was doing the hike, pointed out to me this remarkable rock that kinda resembles a dog or a horse or a Lion(or is it just the mushrooms kicking in!? lol!), so I made it a point to shoot a close-up of  this beauty, especially since the sunset clouds positioned themselves so nicely behind it :)

You can actually see this rock in the Sugarloaf photos too - it's in the top-left corner... In order to zoom in that cose, I had to bring out the big guns :D 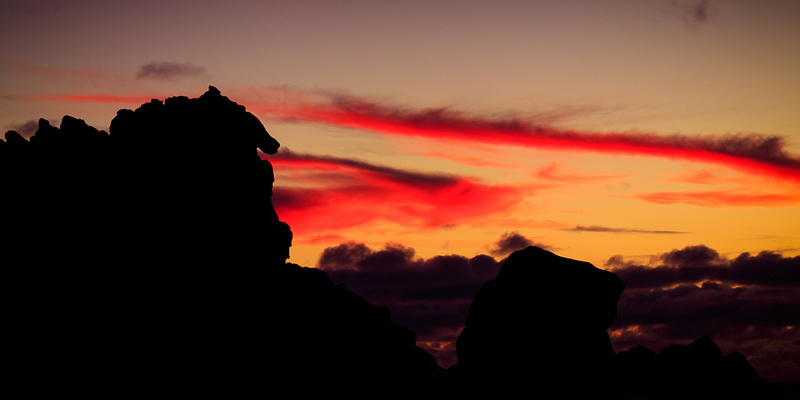 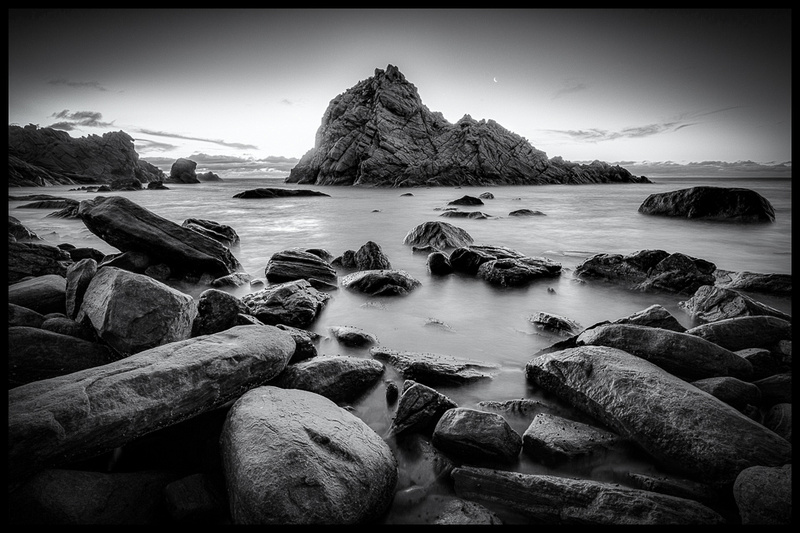